Biryani is one dish that everyone in my family loves. So when everyone was in a mood to have biryani. I decided to make it but I wanted to try out something new yet traditional and that’s when I remembered the Biryani recipe contest that recently took place on one of the most amazing food groups on facebook.

The cover page of the group displayed the winner of the competition and that’s Ms. Sarita Bhat. I quickly decided to check out her recipe and I hit a jackpot. Her recipe was on Beary Biryani / Sultana Biryani from the Beary Community of Karnataka. (Honestly, its the name of the recipe itself that caught my attention.) She fondly calls the Beary Biryani as Sultana Biryani and there is an interesting story behind that, for she learned to make the Beary biryani from her dear friend Sultana who happens to be a great cook.

History about the Beary biryani:

Beary (also known as Byari) is a community concentrated mostly along the southwest coast of India i.e. in coastal Dakshina Kannada, Karnataka. It is an ethnic community which has its own unique traditions and distinct cultural identity. The Beary’s are mainly traders by profession and hold an important place among the other coastal Muslim communities.

Personally, I have witnessed the hospitality of the beary community on one of my recent trip to Karnataka. So trying out this dish became even more special.

* Grind all to a fine paste.

Tip: Take a kadhai and put it on gas. Keep the biryani vessel top of the kadhai. Then increase the flame for 10mins & then put it low flame for dum for about 15 mins. Don’t serve it immediately. Wait for 10mins. Serve with salan & Raita. 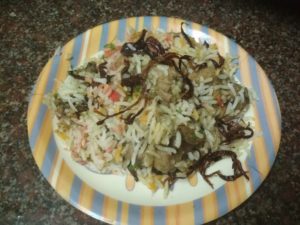 PS: A special Thank you to Ms.Sarita Bhat for permitting me to share the recipe with all. A bigger thank you to Ms.Sultana, for without you this wouldn’t have been possible.

Phodshi also known as safed mulsi or mulshi is one

Do you know during the rains you get 2-3 varieties

Read the caption & save it. Monsoons are my favou

Do you know there are certain varieties of mangoes